If anyone has been following the ups and downs of Bitcoin, you know that Cryptocurrency is very volatile. With that volatility, comes the opportunity to make (or lose) some pretty good money.  I have been following the news on these markets for a while and with Ethereum starting to gain significant value, decided to throw my hat into the ring and build my own Cryptocurrency Mining Rig. 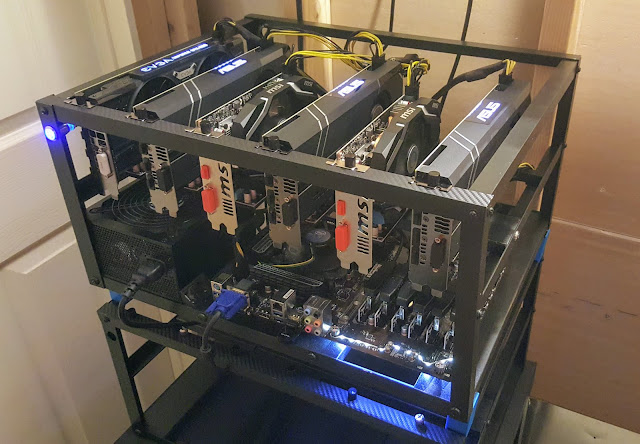 I will break out the full build into a few different posts to keep things from getting too long and wordy, and as always, will include good pictures and even video of the build process. Over the next few days, look for the following posts to hit.

With the intro out of the way, let’s get started with a quick project rundown.  When considering building a system of this type, be aware there is risk involved as with any investment. When I first started putting the parts together for this project, the price of Ethereum was around $240 USD (June 27th). At that level, you could build a system within a price range of $1,800-2,400 and expect a complete payback within 80-90 days.

That is a pretty good ROI, and the rig will continue to mine well beyond that point producing some pretty good profits. So good in fact, that there was a rush of system builders trying to get in on the game, and the availability of Computer Graphics Cards (GPUs) which are normally used for PC gaming began to plummet. GPUs are very effective at mining various cryptocurrencies, and the rush of people putting together systems with 5-8 GPUs hit the market hard. Finding a good midrange GPU was almost impossible, and the  ones you could find were being sold at 2-3x their MSRP by scalpers also trying to make a quick buck off of the surge.

Since then Cryptocurrency has dipped, and Ethererum went as low as $143 (July 16th).  A lot of people who thought they were going to get rich overnight saw their mining profits drop significantly, and eBay soon saw a flood of second hand GPUs, from scrapped systems. For those of us that believe in CryptoCurrency, and are in it for longer than just a quick turn around, this meant we could finally start getting a hold of GPUs again. Here is a picture of the stock issues that have been pretty common, along with the price hikes in GPUs, $279 card selling for over $700.

Even though I was able to finally secure 6x GTX 1060 GPUs, they are from 3 different manufacturers as most sits would not let you purchase more than 1 or 2 cards at a time. So I have a bit of a “Frankenstien” looking build, but they have mostly the same specs, so work well together. Now that I have all the hardware I need, we can start the building process. Stay tuned for the upcoming posts!
Posted by Zane Ross (Mr_Armageddon) at 10:29 AM