Tannerite vs a Microwave & Cantaloupes

Did a bit of shooting this weekend, and decided to use up some of the Tannerite that I had sitting is my storage room.  Shooting Tanneriate in the containers that it ships in is fun and all, but its a lot MORE fun to put it inside things and watch them go boom.  Here is a little background on what Tannerite is for those who don't know.  From the Tannerite web site:

Tannerite® is a binary explosive used primarily as a target for firearms practice. Tannerite is unique in that it is exceptionally stable when subjected to less severe forces such as a hammer blow or being dropped. It is more than 1000 times safer than ordinary black powder since it is not flammable and can not be initiated by any kind of flame or electricity.  It is supplied as two powders which are combined to produce the explosive.

Tannerite® Company recommends using 0.5-pound (0.23 kg) preparations of the substance, which should detonate when shot by a high-powered rifle. Small caliber rim-fire or slow moving pistol ammunition will not initiate a detonation.

Tannerite® detonations occur at a very high velocity, producing a large explosion and cloud of water vapor. It may be useful for persons who are firing at long ranges; in this scenario, a long-range rifle shooter places targets downrange, retreats to his firing position, and fires. The shooter does not have to walk down range to see if he has a hit, the Tannerite® will detonate and serve as an indicator.
Since the two components are not explosive until mixed, they can legally be purchased in the USA without a license.  They can be legally used for sporting purposes in conjunction with small arms, just like black powder and other exempt sporting powder.

So now that you know what it is, take a look at the video below to see what fun it can be!  I basically just mixed the Tannerite, and placed it into smaller containers, which I then inserted into cantaloupes. 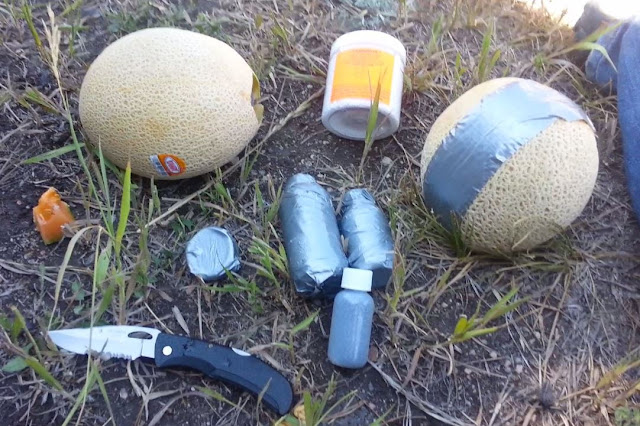 We also used 2 full size containers inside of an old microwave for an impressive demonstration.  Cantaloupes were shot with my AR-15 (5.56mm), microwave was done using my M1A (7.62mm).


Posted by Zane Ross (Mr_Armageddon) at 1:31 AM No comments: